Location: In an exceptional and one of the best observable locations in Vilnius, the new centre of the capital, at the intersection of Konstitucijos Avenue, Geležinio vilko and Ukmergės streets – that the location of the new A-class business centre Baltic Hearts that is shortly to be turned into a new block of modern office unit.

Architecture: The arched forms of the three structures of Baltic Hearts smoothly merge into the surrounding highway rhythm. The moderate-height volumes in the street horizon do not block up the view of the major panoramas of Vilnius, as the protuberant roofs of the buildings replicate the silhouettes of the surrounding hills.

The three identical structures of the A-class Baltic Hearts office buildings are distinguished not only by their architecture, modern construction technologies and equipment – its originality stems from an unconventional concept of „a separate building to a single company“.

In terms of its area occupied (3,300 m²) each of the four-storied buildings most optimally suits the needs of any major international or local company. The limited area of an office building is convenient to settle by a single company that can easily maintain its identity. In case a company’s needs are even more restricted, it may opt to lease a single floor of approximately 1,000 m² in area.

The expressive architectural style of the office complex is intended for those who treat the office building not only as a place of work – it is also part of the company’s image and a sign testifying its exclusiveness. The offices designed in the closest vicinity. From important entry to the city are well visible for passers-by, open in a beautiful view from the Šeškinė hill or the viaducts road meandering nearby.

Those plastic volumes, seemingly hanging in the air and actually raised on supporting columns are just impossible to miss. By their forms and convex roofs the structures elegantly replicate the silhouettes of the Šeškinė hills and harmoniously merger with the surrounding environment. Those low-rise buildings so peacefully climbing up the hill do not obscure the widely opening panoramas of the city or intercept the view of the views to the streets running by.

Widely spread and spacious areas on a single level is just one of so numerous advantages of the new office complex. The lay-out of the premises turns the complex into a much more convenient place to work, communicate, arrange the working places – quite opposite to a high-rise skyscraper where a large company would have to occupy different floors. The new offices will be tailored to the needs of a specific company, designed, arranged and equipped having regard to the specific wishes and desires of the tenants, with a view to reaching the most important – to create a high quality and very convenient working environment perfectly meeting all the most stringent international standards.

Baltic Hearts has been designed by the architects Audrius Ambrasas and Donatas Milinauskas from Ambraso architektų biuras. This bureau of architects also designed the administrative building of Swedbank in Vilnius, DnB Nord bank office in Riga, and a number of other buildings of public or residential purposes in different cities of the Baltic States. 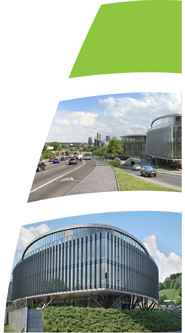